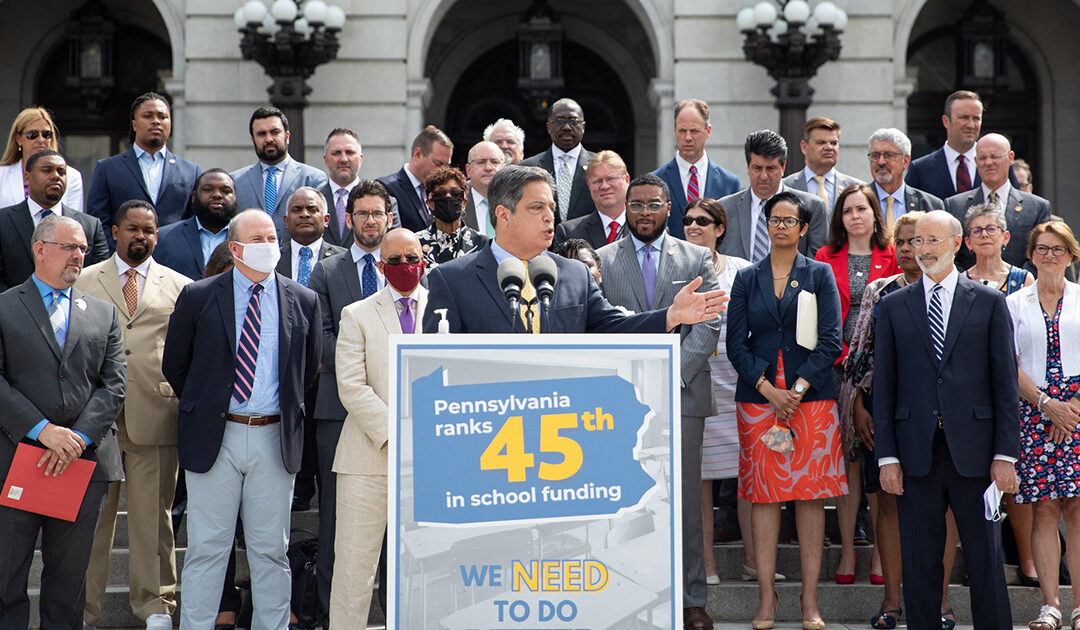 HARRISBURG, June 8, 2021 – House and Senate Democrats and advocates for students from across the state joined Gov. Tom Wolf to call for investing half of the $3 billion in above-expected state revenue into improving schools for students statewide, and fully implementing the state’s Fair Funding Formula to make sure a child’s education isn’t determined by a zip code.

“It’s impossible to calculate how much we have lost as a state, as a society, thanks to inequitable funding leaving kids behind instead of growing their unlimited potential,” House Democratic Leader Joanna McClinton, D-Phila./Delaware, said. “It’s time to make sure the playing field is level. It’s time to make sure a line drawn on a map decades ago isn’t a ticket to success for one child while being a ticket to struggle for another. We’ve had the tools, now we have the money. Let’s do this right.”

“We’ve been fighting for fairly, equitably, adequately funded schools for years here in Harrisburg, and we were told that there wasn’t enough money, that we had deficits, that there wasn’t enough revenue – but we don’t have those problems this year,” Senate Democratic Leader Jay Costa, D-Allegheny, said. “Between the American Rescue Plan and the surplus we have, there is money for our schools and the time for excuses has past. Our students must be a priority statewide, and the budget is where we can show what we value. The PA Senate Democrats, and everyone here, value students and will fight for a budget that shows it.”

“We won’t tolerate two Pennsylvania’s, divided by wealth and separated by zip code,” Senate Democratic Appropriations Committee Chairman Vince Hughes, D-Phila., said. “We now have the opportunity to unite behind safe and healthy classrooms for every student, every teacher and every school employee in this commonwealth.  We won’t accept less.”

“Forcing local districts to rely on their own vastly different resources causes inequities, specifically when it comes to race,” House Democratic Appropriations Committee Chairman Matt Bradford, D-Montgomery, said. “Overwhelmingly, school districts with the highest shares of students of color are in the category of getting less than their fair share. We now have a tremendous opportunity through which we can finally begin fairly funding Pennsylvania schools so that every child in every district has the tools they need and the opportunity they deserve to succeed.”

The Fair Funding Formula was signed into law by Wolf in 2016 and was designed to address inequities in school districts where municipal lines divided the tax base and ensured students would be left behind no matter how high property taxes are raised compared to districts with vigorous tax bases. In some communities, adjoining districts had the same tax rate but had a difference of thousands of dollars per student in expenditures. The problem is the Fair Funding Formula has only applied to new investments since its enactment. Last year just $700 million – 11% of total school spending – was distributed fairly. This plan would apply Fair Funding to all school spending and protect all districts from any cuts.