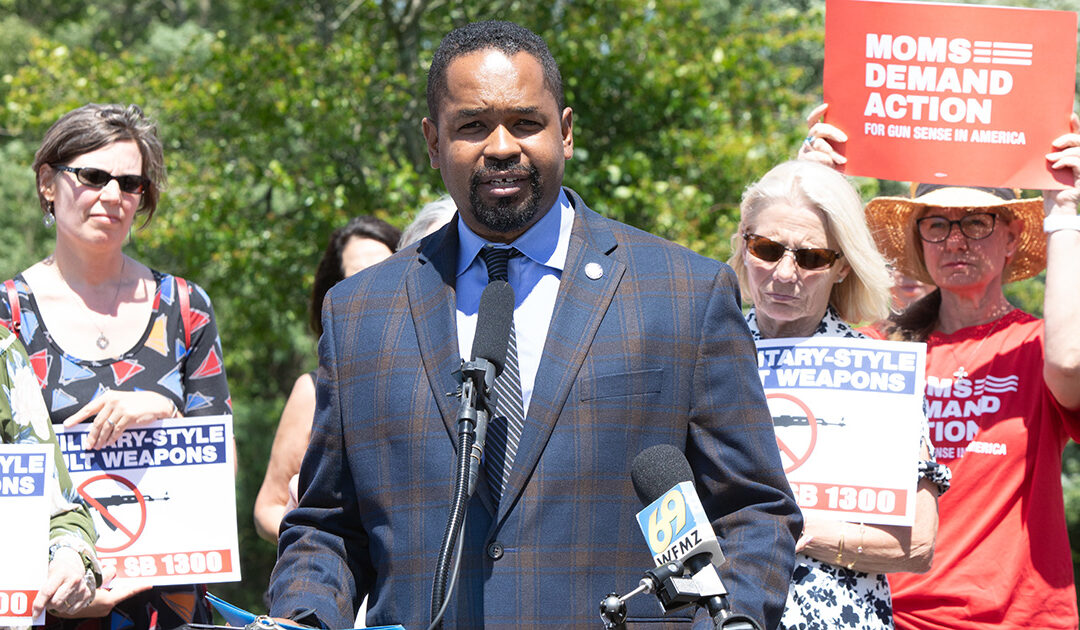 “Military-style weapons have no place in civilian society,” said Sen. Santarsiero at a press conference on Thursday in Lower Makefield Township.  “Easy access to assault weapons is one of the greatest threats to the health and safety of Pennsylvanians.”

The bill will broaden the scope of what the state classifies as assault weapons, banning more than 150 gun models.  It will also ban the sale of gun magazines with a capacity of more than 10 rounds and will provide for a voluntary buy-back program for individuals that currently own firearms that would no longer be permitted.

“Guns are now the leading cause of death among U.S. kids; yet, the only recent bill sent to my desk by our legislators would remove background checks and permits for secured carry,” said Governor Tom Wolf. “I vetoed it. Let’s make it harder — not easier — for dangerous people to use guns to kill people.”

Sen. Maria Collett (D-12) said, “Reducing gun violence in our communities is not an insurmountable task. No parent should send their child to school wondering if it may be the last time they see them. Restricting assault weapons – commonly used in mass shootings, including the recent massacres in Uvalde and Buffalo – is a logical step forward for Pennsylvania.”

“In the wake of the tragedies in Buffalo, Uvalde, and a growing number of communities across our nation, one of the common threads appears to be the proliferation of military-style assault weapons and high-capacity magazines,” said Sen. Carolyn Comitta (D-19) These weapons are designed to inflict maximum carnage and they are doing just that to innocent children, families, and communities. I strongly support an assault weapons ban here in Pennsylvania and I urge legislative leaders to call this bill up for a vote.”

Pennsylvania does not limit the type of weapon which a person may possess; both assault weapons and high-capacity magazines are legal to own in the Commonwealth.

“With each passing day that we fail to enact reasonable gun reforms, we are choosing to protect the gun lobby and firearm manufacturers over the lives of all Pennsylvanians,” said Sen. Santarsiero.  “Since the Sandy Hook Elementary School shooting in 2012, Pennsylvania has taken no meaningful action to keep our children safe with reasonable gun safety measures.  That must change.”

Echoing the need for legislative action to protect our communities, Sen. Tim Kearney (D-26) said, “Now more than ever, we are seeing the need for common-sense gun safety laws.  This legislature has to be action-oriented and committed to doing its job and protecting our constituents.  I signed up to serve my constituents and get things done – not hope and pray.   Sen. Santarsiero’s legislation does just that – it takes action and will protect our communities.  I support it.”

“Faith without works is dead,” said Sen. Sharif Street (D-3). “Thoughts and prayers ring hollow to the families of every victim without action behind them. This is a uniquely American problem, and if we are a civilized nation then the right to bear arms cannot supersede the right to live free from violence. I’m proud to join Senator Santarsiero who continues to lead on common sense reform for responsible firearms ownership.”

Sen. Santarsiero’s legislation is modeled after a law that was enacted in Connecticut after the Sandy Hook Elementary School shooting, which is considered to be one of the toughest in the nation.

Senator John Kane (D-9) noted, “An assault weapon ban in Pennsylvania just makes sense, and it’s about damn time. It is our responsibility to do everything possible to protect the people and the communities of our districts. By enacting straight forward, and common sense legislation like this, we can ensure a safer environment for the children and families of our commonwealth.”

Noting the prevalence of military-style assault weapons in mass shootings, Senators called for community safety and protecting children and our community.

Sen. Amanda Cappelletti (D-17) said, “Military style assault weapons that are frequently used to perpetrate mass shootings have no place in our modern, civil society. I support action to stop the increasing epidemic of gun violence that is taking over our lives, including an assault weapons ban. We must prioritize this legislation to make our communities and loved ones safer.”

“Pennsylvanians deserve to feel safe and to be safe in their homes and neighborhoods, in grocery stores, churches, schools, and public spaces,” added Sen. Nikil Saval (D-1).  “The presence of military-style assault weapons destroys this safety. These weapons have only one purpose, which is to kill as many people as possible in the shortest time possible. Prohibiting assault weapons shows residents that their lives and the lives of their loved ones are more important than the profits of gun lobbies.”

Rep. Dan Frankel, who co-chairs the PA SAFE Caucus with Sens. Santarsiero and Cappelletti said, “More than three years ago, 11 of my friends and neighbors were murdered in an anti-Semitic attack as they worshipped in the Tree of Life building. We will never know how many of their lives would have been saved if this legislation had been in place, but we can take action now to prevent other communities from suffering as mine has. A firearm designed to kill as many people as possible, as quickly as possible, has no place on the streets of Pennsylvania.”  The PA SAFE Caucus is a group of legislators who believe in reducing all types of violence in our society through adequate funding for mental health services; stronger tools for law enforcement; resources to curb the effects of addiction and illegal drugs; and solutions that reduce gun violence and promote public safety.

Gun violence prevention groups also voiced their support for the proposed legislation.  “Weapons of war have no place where we shop, eat, learn and pray,” said Adam Garber, Executive Director, CeaseFire PA.  “That simple fact has been painfully obvious in the last few weeks in Buffalo and Uvalde. Now, it’s time for our elected officials to take action to stop our communities from being war zones by banning assault weapons.”

“We applaud Sen. Santarsiero and the other Pennsylvania legislators who are taking action by introducing and supporting common-sense legislation that will protect the safety and lives of children, as well as second amendment rights. We encourage their colleagues in the State Senate and House to follow their lead and pass the legislation immediately,” said Mark Barden, co-founder and CEO of Sandy Hook Promise Action Fund and father of Daniel, who was killed in the Sandy Hook Elementary School tragedy.

The full press conference can be viewed here.