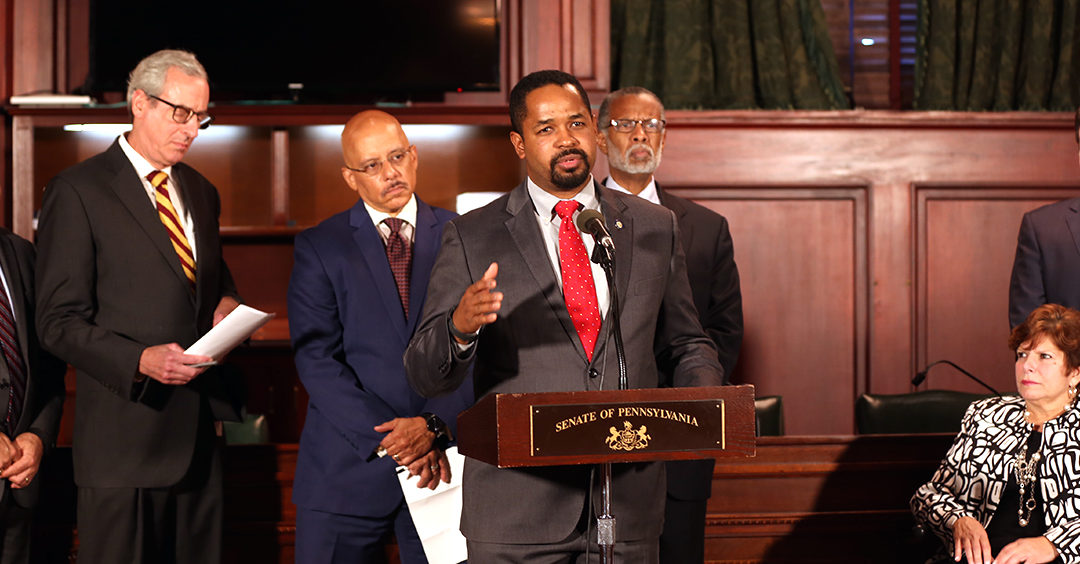 HARRISBURG, October 18, 2017 — State Senate Democrats today blasted President Trump’s latest actions regarding the Affordable Care Act in Pennsylvania and detailed the debilitating impact on Pennsylvanians that his latest acts will have on working families.

The president ordered the suspension of an estimated $7 billion in cost-sharing reduction payments that are designed to help lower- and middle-income Americans.  He also moved to restructure the insurance market by opening the door to low-cost, high-deductible minimal coverage policies that offer little protection for consumers.

As a result, the Pennsylvania Insurance Department announced this week that individual and small group rates under the Affordable Care Act will increase by an average 30.6 percent due to President Trump’s decision to discontinue cost-sharing reduction payments to insurers.

At a Capitol news conference today, Senate Democrats and House Democratic Caucus Chair Dan Frankel (D-Allegheny) illustrated how the president’s actions will hurt working families.  They pointed out that a two-income family of four that earns $100,000 per year and purchases health insurance through the insurance exchange will have a $327 monthly premium increase and a yearly spike of $3,924 as a result of Trump’s actions.

“People are going to suffer so that President Trump can score political points with those like him who want to dismantle Obamacare,” said Senate Democratic Leader Jay Costa (D-Allegheny). “It is our obligation to take steps to not allow him to destroy this landmark health care law, which has helped a million Pennsylvanians get coverage and has created thousands of family-sustaining jobs in the health care industry.”

State lawmakers met yesterday with the Pennsylvania Insurance Department and four major health coverage providers to discuss steps to mitigate the pain on consumers, many of whom are working class and job creators, according to state Sen. Sharif Street, the Democratic chairman of the Senate Banking and Insurance Committee.

“Trump’s actions are going to hit middle class families, small business owners and entrepreneurs the hardest,” said Street (D-Philadelphia). “These are individuals who make our economy grow and many of them voted for Trump because he’s a businessman and said he would look out for them, but he’s turned his back on them.”

Street also warned that Trump’s efforts to roll back an Obama Administration ruling on types of employers that can form and offer “Association Health Plans” (AHP) under the Employee Retirement Income Security Act (ERISA) will destabilize the insurance market for everyone and loosen regulations, which will make it more difficult for the government to protect Pennsylvanians.

“It’s our job as elected officials to protect Pennsylvanians’ rights. This plan will take away our ability to do that effectively and will destabilize the market, which will impact us all,” Street said.

“Health care is a right, not a privilege for those who have the money to pay for it. Senate Democrats have driven every advance in health care because we recognize that everyone deserves access to quality, affordable health coverage,” said Hughes. “President Trump is repeatedly attempting to destroy the lives of citizens, especially those who voted for him, by destroying CHIP, rolling back reproductive support, reducing the amount of time that folks can enroll in the Affordable Care Act, and pulling his support from the latest compromise on health care subsidies.”

“Our public policy must be based on a set of values that accommodate the diversity of this nation, not a set of religious conditions that are based upon the faith and membership of a small organization. As a Christian, I am offended by the changes in policy that eliminate access to contraceptive care for individuals because of the faith commitment of their employer,” said Haywood. “Health care is a human right. Trump’s decision to reduce support to help low- and middle-income receive coverage is immoral. It is immoral to put families in a position where they have to pay thousands of dollars more per year for life-sustaining health coverage.”