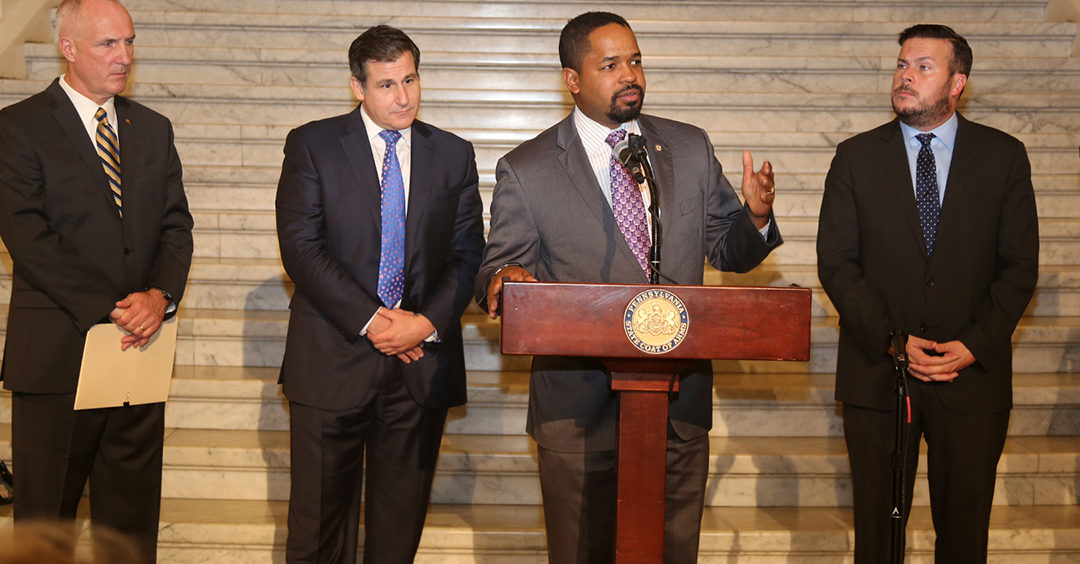 Harrisburg, PA – October 24, 2017 – This morning, elected officials stood with advocates to push for an expansion of Pennsylvania’s hate crime definition.

As state law currently stands race, color, religion or national origin are protected classes under the hate crimes statute. Pending legislation in the Senate (SB 96)  and House (HB 505) would reenact Act 143 of 2002 and again extend these protections to include ancestry, mental or physical disability, sexual orientation, gender, and gender identity.

Republicans, Democrats, Representatives, Senators, activists, and the Lieutenant Governor all expressed their disappointment that this bill is not yet law – and urged the General Assembly to move quickly to protect more Pennsylvania citizens from hate crimes.

“I think we’ve all watched the news lately and seen unspeakable acts of violence and discrimination being waged against targeted groups and individuals.  We’ve seen people in the disability community targeted, we’ve seen LGBT people targeted, we’ve seen black, Jewish, Muslim, and Latino people and communities targeted across the country and right here at home,” said Senator Larry Farnese (D-Philadelphia), the prime sponsor of the Senate Bill, said. “We must not allow these discriminatory practices to continue, nor allow unprotected populations to remain unrepresented here in this building.”

“If you can’t find it in your heart to protect vulnerable citizens from bigotry fueled violence, maybe you can look at your wallet,” said Lieutenant Governor Mike Stack. “The job creators of the 21st century, like Amazon, want to do business in a state where their employees — all of their employees — are valued and protected. Holding up civil rights legislation in our legislature sends the wrong message about what kind of state we are.”

“Pennsylvania’s lack of protections against hate crimes for LGBT communities and persons with disabilities is a national embarrassment. We remain the only state in the northeast to not enshrine protections against hate crimes for these groups into law,” Representative Kevin Boyle (D-Philadelphia), the prime sponsor of the House bill, said. “I have introduced this bill for two consecutive sessions to add these protections but it has never been brought to a vote. Our legislature is failing its duty to protect the citizens of this commonwealth, and ignoring the constitutional rights of the physically and intellectually disabled, and the LGBT communities.”

“For those of us who revere the Constitution and appreciate the deep sense of liberty it enshrines, expanding hate crimes protections to include ancestry, disability, and gender identity is the right thing to do in Pennsylvania and around the country,” said Senator Anthony Williams (D-Philadelphia).

“By expanding the groups covered by hate crime laws, we are telling everyone that their human and constitutional rights are sacrosanct, and those who attempt to cripple those rights will face the full force of the law,” Representative Thomas Murt (R-Montgomery) said.

“Hate crimes are not committed to cause fear in one person; they are done to cause fear to an entire group – to send a message,” Representative Dan Frankel (D-Allegheny) said. “Well, the Pennsylvania General Assembly can send a message this year by passing House Bill 505 and Senate Bill 96. We can send a message that hate crimes based on a person’s ancestry, mental or physical disability, sexual orientation, gender, or gender identity will not be tolerated in any corner of this state. As recent events around this country make clear, we must update our laws now to protect more people from heinous acts of violence and hatred.”

For more information and action on the bill, please visit the Legislative Action Network of the Philadelphia Bar Association http://www.philadelphiabar.org/page/LACTakeAction3?appNum=3