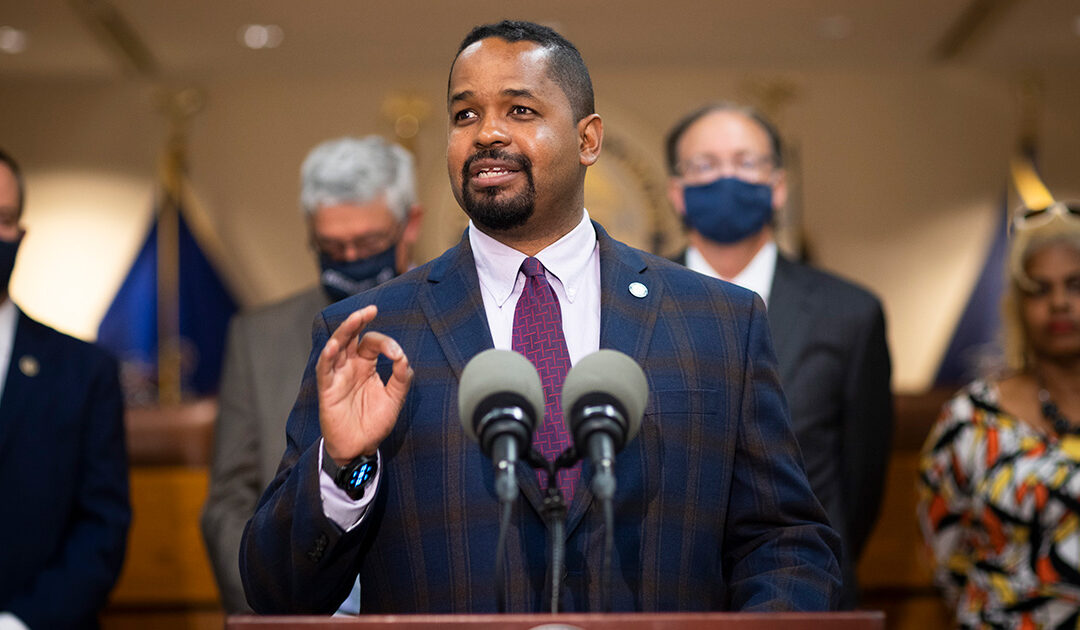 Media, PA – June 17, 2021 – Governor Tom Wolf was joined by Delaware County leaders today to denounce efforts by Harrisburg Republicans to pass a bill disguised as election reform that is really about restricting the freedom to vote in retaliation for the outcome of the November election. The bill creates new barriers to register to vote and for voting by mail or in-person and rolls back significant progress from the landmark, bipartisan election reforms in Act 77 enacted in 2019.

“When it comes to voting rights, this is a watershed moment,” said Gov. Wolf. “There are two forces in our country: Those fighting to protect our democracy, and those trying to undermine it. I stand on the side of democracy, in support of Pennsylvanians’ freedom to vote. Pennsylvania already has secure elections, but bad faith actors are spreading lies and disinformation And now those same people who spread those lies and encouraged the mob that attacked the Capitol are attacking the freedom to vote.

“I will not be lectured on the importance of election integrity by the same people who wrote a letter begging Congress to throw out Pennsylvanians’ lawfully cast votes only a few months ago.”

The governor said that while the House GOP bill has some areas of potential agreement around giving counties more time to pre-canvass ballots before the election so results are available sooner, increasing poll worker pay and requiring counties to use electronic poll books, which improve security and would enable same day registration, the legislation is riddled with unacceptable barriers to silence voters.

“The right to vote is sacred, but House Bill 1300 is a Trojan horse for voter suppression,” said Sen. Tim Kearney. “It imposes new restrictions on who can vote, when they can vote, and how they can vote. This is a dangerous effort built upon the Big Lie of voter fraud, and we saw just how dangerous these efforts can be on January 6th at the nation’s Capitol. Democracy isn’t promised to us. It’s something every generation must stand up and fight for.”

“We have seen efforts to disenfranchise voters by advancing burdensome and duplicative Voter ID requirements before,” said Sen. Sharif Street. “This is Jim Crow 2.0. There has been a coordinated national campaign by Republicans to punish record turnout in one of the most secure elections in history. Restricting access to the ballot and making it harder to vote under the guise of security is voter suppression. It is dishonest, dangerous to our democracy and will disparately affect communities of color. That we must defend the constitutional right to vote even as we embrace Juneteenth in the Commonwealth and as a nation, is a reminder that our progress is not permanent. We must continue to protect the right to vote for all Pennsylvanians.”

“House State Government Committee members sat through months of testimony from local election officials and voting experts,” said the committee’s Democratic Chairwoman Rep. Margo Davidson, D-Delaware. “In more than 30 hours of testimony, and despite the false claims and conspiracies being heaped on them by my Republican counterparts, there was clear agreement among these testifiers on three reforms — pre-canvassing, more resources for all election operations and expanded timelines for essential year-long election processes. The bill brought before us offers far too little of these bi-partisan policies but saddles us with a horrific heap of regressive suppression, spearheaded by the Big Lie. It is clear to me and everyone who reads House Bill 1300 that the gerrymandered Republican majority fully intends to continue the lies, restrict the civil rights of Pennsylvanians and make voter suppression the law of the land.”

“These measures are not about improving access to voting or election security,” said Gov. Wolf. “They’re about politicians trying to control voting for their own political gain. Instead of fast-tracking legislation that tries to force the bad through with the good, the General Assembly should send legislation to my desk that would honestly build on the bipartisan achievements of Act 77 and make real improvements to election procedures in the commonwealth.”

Pennsylvania voters have embraced the new freedom to vote by mail, which is made possible by Act 77. In the November 2020 election, more than 2.6 million mail and absentee ballots were cast, 38 percent of the 6.8 million ballots cast in the election.

“Pennsylvania has made great progress in expanding voter access through the bi-partisan Act 77, and we should not go backward,” said Acting Secretary of State Veronica W. Degraffenreid. “Our election security is robust and resilient and does not depend on restricting voting rights to be effective.”

With a few days remaining before the legislature’s summer recess, the governor urged legislative republicans to put aside partisan politics in order to pass the simple, noncontroversial improvements, such as pre-canvassing, poll worker pay and county election funding, which are supported by lawmakers on both sides of the aisle.