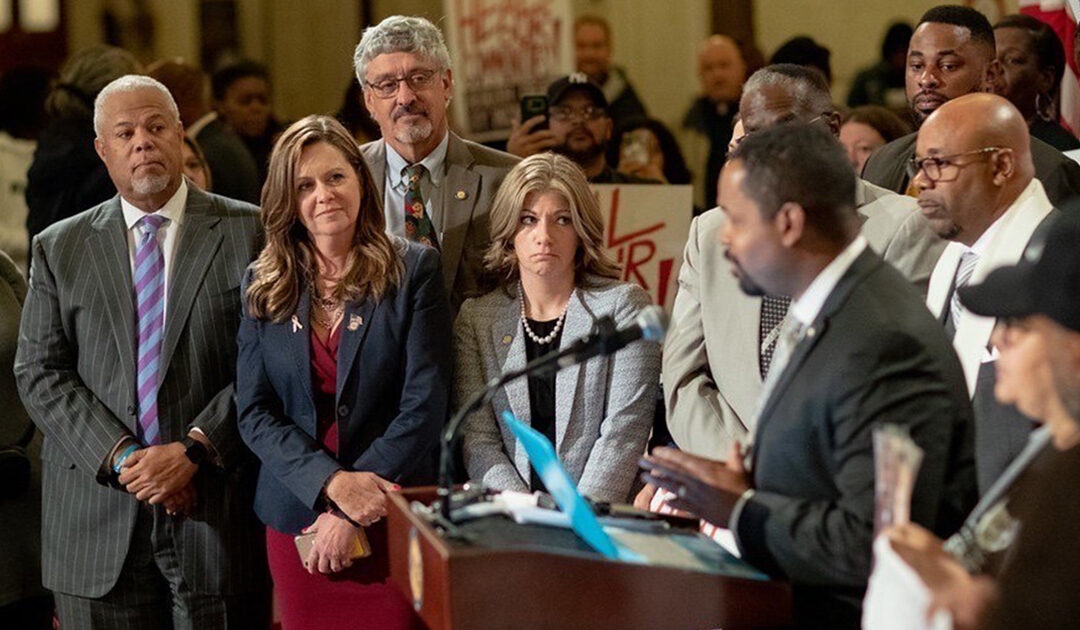 Harrisburg – June 30, 2020 – Pennsylvania Senate Democrats gathered in the Capitol and through Zoom to discuss the status of their legislative agenda for police reforms, and to announce a statewide Racial Equity Solutions Tour.

PA Senate Democrats introduced a comprehensive package of law enforcement reform legislation on June 10, and in the past two weeks of session have made major progress on their legislative initiatives.

Bills sent to the Governor

Bills sent to the House

“As a former law enforcement officer, I understand the pressure that our police officers are under, and I know that we can make common sense reforms to our justice system to make it better and improve its outcomes,” said Senator Costa. “Today’s accomplishments are just a piece of the law enforcement reforms that our caucus and our constituents believe are necessary. Our efforts will not cease.”

As local, national, and worldwide demonstrations began over the killing of George Floyd, the Senate Democrats renewed their commitment to police reform, and have committed to legislative solutions to achieve police reform and racial equity in Pennsylvania.

Costa also said that he was very proud of the passage of House Bill 1841 through the Senate today. The bill would require that MPOETC (Municipal Police Officers’ Education and Training Commission) establish and maintain an electronic database containing the separation records that is accessible to all law enforcement agencies in the Commonwealth.

“We do have systemic racism in this county, and in this state. As a legislative body, we need to commit to dismantling the systems that have allowed Black people to be overpoliced, unfairly targeted, and over incarcerated for generations,” said Sen. Anthony H. Williams (D- Philadelphia/Delaware).

Williams also announced that he will be leading the Senate Democrats in a statewide Racial Equity Solutions Tour.

Caucus members will hold conversations, both in-person adhering to CDC guidelines and virtually, throughout the summer in addition to lending their voices to protests and events organized by community leaders.

“We have had enough listening. We know the systemic issues that Black people and Black communities face, this is a tour to gather actionable solutions for change,” Williams said.

Senate Bill 1205, a ban on chokeholds by police, was sponsored by Sen. Sharif Street (D- Philadelphia), and was also passed out of the Senate unanimously last week.

“There is no silver bullet to fix policing in America. While we’re encouraged by the advance of a variety of policy around police reform, I and my colleagues in the Senate Democratic Caucus are committed to a comprehensive package of reforms that reimagine public safety while investing in areas better suited to serve the diverse needs of our communities. This means the community must be a part of the conversation as we work to address the historic inequities and disparities in government,“ Street said.

It was also noted that the Senate was able to send House Bill 1910 to the Governor today, ensuring increased education and training for Pennsylvania law enforcement when they handle those with diverse backgrounds, victims of child abuse, and how to treat fellow officers experiencing Post Traumatic Stress Disorder (PTSD).

“The issues we want to address with this tour are not new, however there appears to be growing momentum coming from genuine and concerted desires to understand and rectify the longstanding issues our nation has never fully addressed,” said Sen. Vincent Hughes (D-Philadelphia/Montgomery). “We must seize this moment and enact real policies and protections in Pennsylvania that address racism and systemic inequities in the commonwealth. The movement of these legislative initiatives shows that people are fed up with police abuse. They have shown that protest and civic engagement works. We ask that they not stop, and that they keep on marching.”

“I have been proud to attend multiple peaceful protests for racial justice in Hummelstown, Selinsgrove, Wilkes-Barre, Cheltenham, and Philadelphia.  Black Lives Matter protestors have created a moment for change that we must seize to end systemic racism and police brutality,” Haywood said.

Sen. Katie Muth (D-Berks/Chester/Montgomery) spoke about her ‘No Consent in Custody’ legislation, Senate Bill 851. Muth’s legislation had been added as an amendment to HB 256.

“Additional legislative action is needed to ensure true reform to our policing practices here in Pennsylvania,” said Senator Katie Muth. “While the recent action in both the House and Senate is a step in the right direction, the General Assembly must work urgently to pass much needed reform to ensure accountability and transparency in the police system, invest in historically oppressed communities, end systemic racism and police brutality.  We have a lot of work to do, and this work is long overdue.”

“We have made important steps on the long road to justice by moving police reforms through the General Assembly in recent weeks. This statewide tour is another step on that road,” said Senator Tim Kearney (D-Delaware/Chester). “We are going to have community-driven discussions that focus on solutions to end systemic racism and reimagine public safety. I am hopeful the tour will lead to meaningful action, because this moment in history offers us a real chance to live up to our ideals and meet the promise of liberty and justice for all.”